From this week's Cityside column in News-Star: 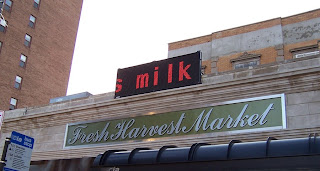 In a neighborhood where it's sometimes easier to buy crack than fresh produce, Uptown residents are just giddy about the opening of Fresh Harvest Market at 4650 N. Sheridan.

Fresh Harvest, which celebrated its grand opening on March 6, has been getting rave reviews from produce-starved Uptown residents. News-Star needed to buy milk so we headed over to Fresh Harvest on Monday.

The store is everything that locals say it is - friendly sales associates, a great selection of merchandise and a beautiful deli/meat counter and bakery. The produce is fresh and sassy. The best part is the store doesn't scare the hell out of you when you walk inside, unlike some of the other food establishments in Uptown.

We spoke to one happy shopper, Lillian Sims, who was sampling the salads. She said she's been to Fresh Harvest six times since it opened.

"It's convenient. I've tried several of their meats which are very good," said Lillian, who describes herself as a serial bargain hunter. "The prices aren't too high. It's competitive with Jewel's and Dominick's."

We bought a gallon of milk for $1.99, and eggs were on sale for 99 cents. This is good information to have since News-Star will soon be unemployed and we'll need food for that box we'll be living in next to Pup Town.