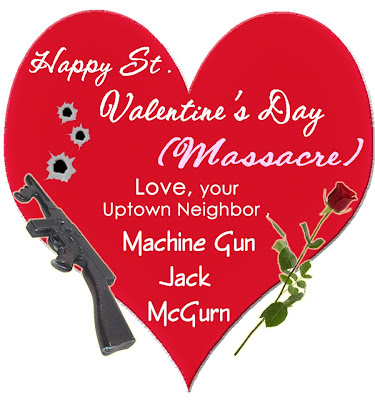 Today we remember "Machine Gun" Jack McGurn, a member of Al Capone's gang, forever associated with St. Valentine's Day. Why? Because our fellow Uptowner was responsible for the famous 1929 St. Valentine's Day Massacre, planning it with boss Al C.

Closer to home, McGurn was owner of the Green Mill Cocktail Lounge, which was in the heart of the territory controlled by Capone rival Bugs Moran. Because of McGurn's ownership stake in the club, the Green Mill served booze supplied by Capone, who was also a frequent patron.

The Green Mill was home to singer Joe E. Lewis in the mid-1920s. When Lewis refused to renew his contract (because another gang offered him more money to appear at a club located at Clark & Diversey), McGurn decided to persuade Lewis to stay on. His version of persuasion was to have Lewis's throat slit, cutting part of his tongue off, and leaving him for dead. Lewis survived, and actually opened 11 weeks later at the Rendezvous Café (where the Days Inn Lincoln Park is located now).

But what makes Valentine's Day particularly a day to remember Jack McGurn was his death. By 1936, he was out of favor with the Mob and destitute. On February 14, he was bowling alone when two men with machine guns assassinated him. They left his body in the bowling alley with a Valentine pinned to it, reading: