Sun-Times: "Another Chance On The N. Side's Money Pit" 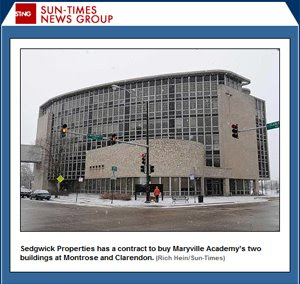 Uptown is a North Side neighborhood that has made some developers regret they ever ventured into the place. But still they come, drawn by available property that could turn golden with new construction or just a sprucing up.

The latest development firm to bite the Uptown apple is Sedgwick Properties Development Corp., which has signed a contract to buy the former Maryville Academy property at Montrose and Clarendon. The site consists of buildings north of Montrose and on both sides of Clarendon, just off Lake Shore Drive and Lincoln Park.

The potential of new homes with lake views wasn't lost on Marty Paris, Sedgwick president. At 3½ acres, the property is large enough to do several things, such as adding retail space into the design. So Paris said he's working on a mixed-use concept he hopes to refine after discussions with neighborhood groups. He also said he believes the property can accommodate a high-rise, although he didn't want to get specific.

Perhaps more to the point is why he's behind a large-scale deal with the housing market still falling and the credit spigot cut off for almost anything speculative construction. Paris said he looks forward to an economy stabilizing later next year and hopes to close on the sale by this fall. Moreover, the market for rental housing isn't suffering as much as the for-sale component, he said.

"We'll make a prudent business decision. The closing depends on some things happening on our end and on the seller's end," he said. The seller is a Roman Catholic nuns' order, the Missionary Sisters of the Sacred Heart.

With the sale incomplete, Paris declined to say how much he's agreed to pay. Sedgwick has been a quietly effective condo builder, taking its risks in small pieces and handling architectural duties in-house. Just south of Uptown in Wrigleyville, it replaced the shuttered Marigold Bowl at 828 W. Grace with a 140-unit building. Sedgwick has two condo buildings under way in the South Loop, a completed building at 1464 S. Michigan and one under construction at 1935 S. Wabash.

Paris said Uptown's alderman, Helen Shiller (46th), has encouraged him to gather input from the community. Others who have done that have found themselves caught in the Uptown crossfire of rich vs. poor. It took years before developer Peter Holsten to get anything started on the Wilson Yard site at Montrose and Broadway, and now citizens have challenged his zoning deal in a clever lawsuit that alleges the city broke its rules in awarding Wilson Yard tax-increment financing.

A zoning change for housing on the Maryville site would carry a requirement that 10 percent of the units be set at below-market prices or rents. TIF funds could increase that commitment. But Paris said he doesn't expect his site to explode with controversy. The Maryville property is near one of Uptown's wealthiest areas, including the landmark Hutchinson Street district of spacious homes.