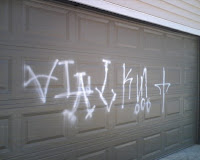 By Jeanna Bryner, Live Science.com/ MSNBC
The mere presence of graffiti doubles the number of people littering and stealing in a neighborhood, new research suggests.

The results, which are detailed in the Nov. 21 issue of the journal Science, support and expand on the so-called broken windows theory, which forms the backbone of many crime prevention programs in major cities such as New York.

The theory suggests that signs of disorder, such as broken windows, graffiti and litter, can open the door to individuals breaking other social norms and rules. In New York's "Quality of Life Campaign," adopted in the mid-1990s, city filth, including graffiti, street litter and signs of vandalism, were removed. And petty crime rates did drop. Continue Reading
By Uptown Updater - November 22, 2008