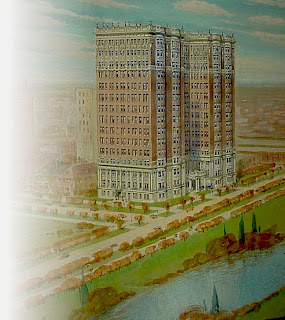 Many of us pass by 5000 Marine Drive on a regular basis, but do you know the history of this grand building known as "The Aquitania?"

When Chicago Was Hollywood...

George K. Spoor's Essanay studio defined the art and success of motion picture production in the United States. As the premier studio in the premier film making city, Essanay employed the likes of Charlie Chaplin, Gloria Swanson, Wallace Beery, Beverly Bayne, Francis X. Bushman, and renowned gossip columnist Louella Parsons (as an early scriptwriter) producing silent films from the company's lot at 1345 W. Argyle as well as other Chicago area locations. Christopher Columbus landed in Jackson Park; Lawrence of Arabia plied the Indiana Dunes; the streets of Uptown and Edgewater doubled as their counterparts around the world.

New York architects Ralph Harris and Byron Jillson were commissioned to build the Aquitania Hotel to house Essanay talent and employees who flocked to Chicago for film industry work. The magnificent Georgian edifice produced by Byron and Jillson sat on a parcel of lakefront land owned by Mr. Spoor just east of his home at 908 West Argyle Street.

The Aquitania (named for the famous Cunard ocean liner) was finished in 1923, a splendid construction upon what at the time was a popular Lake Michigan beach. The building was designed to afford dramatic views for each apartment and boasted characteristically Georgian bay windows and distinctive terracotta ornamentation the likes of which are rarely found on any Chicago building of its size. Since 1949, the Aquitania has been managed as a Co-op, a form of property ownership common in New York but somewhat rare in Chicago.

Al Capone's attorney is purported to have resided in the building. Current residents are less notorious, representing a mix of old and young, long time and shorter term residents, a smattering of children and teenagers and several domestic animals ... all of whom have chosen to live in, embrace and preserve this historic, well built monument on the edge of Margate Park, one of the few buildings of its size and embellishment remaining on Chicago's lakefront.

The Aquitania, at 5000 North Marine Drive, has been listed on the National Register of Historic Places. 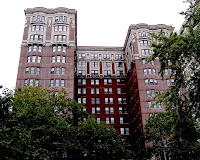