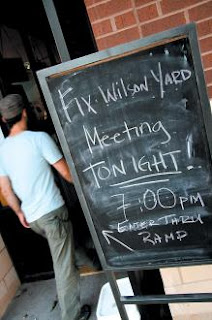 Permission to land? The years-long debate over the redevelopment of Wilson Yard heats up.
By Jake Malooley Photograph by Matthew Taplinger
Time Out Chicago / Issue 183 : Aug 28–Sep 3, 2008

Though the flames that destroyed Uptown's Wilson Yard bus barn were quelled in 1996, the debate over the redevelopment of the semivacant land bordered by Broadway, Montrose Avenue and CTA Red Line tracks south of Wilson Station has never been more fiery.

Read the rest of the article here. (Bonus points for seeing just how many seconds it takes Jamiko Rose of O.N.E. to play the race and NIMBY cards!)