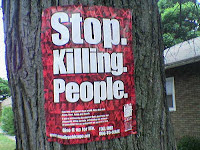 Francis Oduro came to the United States to follow in his father's footsteps and take advantage of the country's educational opportunities to study engineering.

Oduro, 22, liked living in Chicago. But he was horrified by the violence he would see every night on the news, including gunplay that was unheard of in his native Ghana, his family said.

On Wednesday night, Oduro became a victim of that same violence, gunned down along the 4500 block of North Broadway as he walked to a CTA train stop from Truman College, where he had been taking classes for more than a year. Another man, a suspected gang member who police said may have been the target of the shooting, was critically injured.
Continue Reading:
By Uptown Updater - May 23, 2008