Preston Bradley Center to Be Reborn

We have been following updates with the Preston Bradley Center for over two years since it first went on the market. 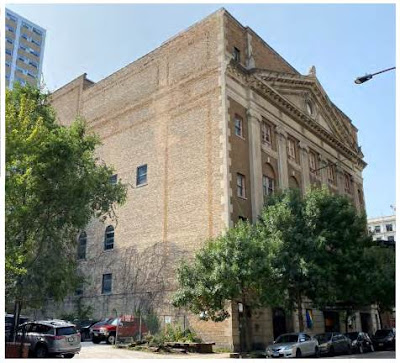 Today we learned that the beautiful and historic building at 941 W. Lawrence that was once home to Preston Bradley's Peoples Church has been sold to orthopedic surgeon, blues enthusiast and philanthropist Dr. Daniel Ivankovich. .

Dr. Ivankovich tells us his dream is coming true with the purchase, which will become a home for his philanthropic activities as well as a music and cultural arts center. He envisions hosting "concerts, plays, educational seminars, fundraisers for charitable organizations," and other cultural events.

Dr. Ivankovich has had a profound effect on Chicago's community since his graduation from medical school, working as an orthopedic surgeon as well as medical director and co-founder of OnePatient Global Health Initiative, a nonprofit foundation based in Chicago with a mission “to treat patients... who have musculoskeletal health disorders, regardless of their ability to pay.”

Dr. Ivankovich was born in Zagreb, Croatia and moved to Chicago in 1968. His parents were both doctors at Rush University, and he joined the Northwestern University Wildcats for a short run as a star recruit before blowing out his knee early in his freshman season during a showcase game with Patrick Ewing (no joke!). During his recovery, Dr. Ivankovich, who played violin in his youth, learned to play the guitar, and fell in love with the Chicago blues scene. He ended up hosting a popular (and syndicated) radio show on WNUR 89.3 focusing on the blues, and has continued his love affair with the blues to this day.

Dr. Ivankovich currently works as the medical director of OnePatient while simultaneously running three OnePatient clinics in Chicago's most underserved areas. His policy with OnePatient is to treat patients regardless of their ability to pay, and OnePatient has treated close to 200,000 uninsured or underinsured patients from troubled neighborhoods in Chicago.

Dr. Ivankovich also keeps up a performing schedule with his band and keeps close contact with the blues community through his work with the Chicago Blues Society. Dr. Ivankovich has worked for years helping aging local blues musicians navigate the healthcare system, providing many of them and their families with free care and financial assistance.

We are excited to see what this new chapter for the Preston Bradley Center brings and look forward to learning more about what Dr. Ivankovich has planned.