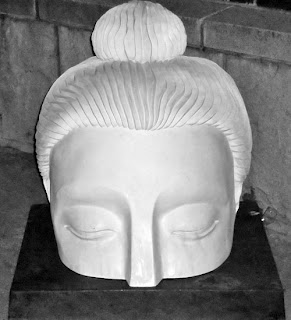 You may be seeing a familiar face in some unfamiliar surroundings for the next few months.  Uptown is one of ten Chicago communities taking part in a collaborative public art and civic engagement project called Ten Thousand Ripples, and sculptures of an emerging Buddha are popping up all over the community.

The artist, Chicagoan Indira Johnson, says:  "A powerful and profound need exists within each of us to know that peace is possible in spite of the violence that surrounds us.  Ten Thousand Ripples is a reminder of that need.  It invokes the image of an emerging Buddha as a widely held symbol of peace, inviting people to think about how they can find peace in their own lives and in their communities." 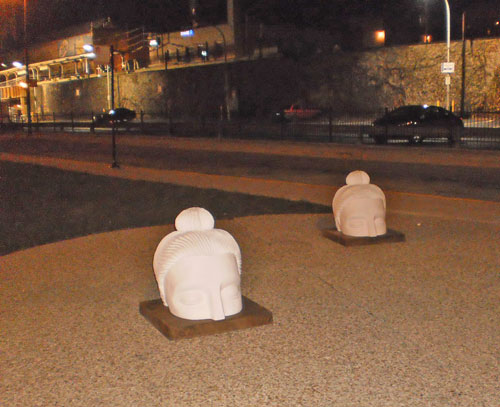 Buddhas were installed Thursday, at Somerset Place (5019 N Sheridan) (top photo), in the window at MDT Architects (4619 N Broadway), at Bridgeview Bank (Broadway and Clifton) (above), and at the Aragon (Lawrence and Winthrop).  We've also heard of few more, at Alternatives (4730 N Sheridan), in the parking lot at 1067 N Lawrence, and at Hao Lan salon (1059 W Argyle).

Keep an eye out, they're everywhere!  Nine other communities are having similar Buddha outbreaks, including Albany Park, Pilsen, Rogers Park, and South Chicago this fall.  Next spring we'll be joined by Auburn Gresham, Back of the Yards, Evanston, Little Village, and North Lawndale.  The project culminates with a July 2013 exhibit at the Loyola University Museum of Art.