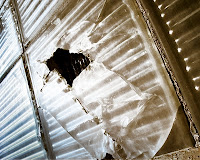 It's still a problem, a number of aldermen said this morning in City Hall, when a version of this issue emerged during a city council's Committee on Housing and Real Estate meeting.

Alderman James Cappleman, who represents the 46th Ward, said his community struggles with a number of building owners who manage their properties "very, very poorly" but still are helped by the city's Low Income Housing Trust Fund.

The trust fund operates three programs meant to keep rents affordable for some of the poorest residents of Chicago, those whose household earnings total no more than 30 percent of the area median, and even less than that in some cases.

The trust's rental subsidy "reduces rents on a specified number of units approved by the Trust Fund Board of Directors in the building or development to a level that is affordable for very low-income individuals and families," according to the city's description. There's a mortgage loan-forgiveness effort and dollars for supportive housing programs.

Cappleman said there were 13 troubled buildings in his ward, and that "four or five" of them were getting rental subsidy from the trust fund.

"There's a lot of drug traffic inside those buildings. And it's caused a lot of concern for the residents living there and also for the residents in the surrounding community," he said. "There are some buildings with multiple, multiple numbers of code violations, and getting them to respond in a manner that's quick and efficient is next to impossible."

Property owners seeking to qualify for trust fund dollars should be able to demonstrate a record of solid management practices, he went on to say. "I don't see that in place," he said.